Bardenas is a composition for variable ensemble and multichannel field recordings. The graphic score is composed of a series of twelve images that belong to a desert canyon outside the town where I was born and raised, in the north of Spain. The beauty and natural resources of this rugged terrain attract tourism, animal herders, and film productions. And, ever since the Spanish and American governments signed an agreement under Franco’s dictatorship in the 1950s, Bardenas Reales has also served as an arena for bombing rehearsals conducted by the militaries of various coalition nations.

The reverberation of this military activity was a constant feature of my childhood soundscape, but I internalized those sounds without critical understanding until I revisited the area in my adulthood. I learned then that these sounds are not just the reverberations of past conflicts rehearsed in Bardenas (Balkans, both Gulf Wars, and Libya in 2011, among others) but also the ongoing conflict between the locals who oppose this practice and those who benefit economically from its perpetuation. The piece represents my process of reinterpreting the place I come from through these sounds, and a larger problem in Spain related to our historical memory and our inability to confront and talk about our recent past.

Bardenas combines field recordings of military jets streaking overhead with live instrumentation, guided by the shape of a landscape that has absorbed the resonance of thousands of bombs detonated there over the decades. Performers embody the mountains that surround the shooting range and that for the first time speak back this history to an audience placed in the center.

Bardenas was premiered on May 2018, performed by the string quartet The Rhythm Method: 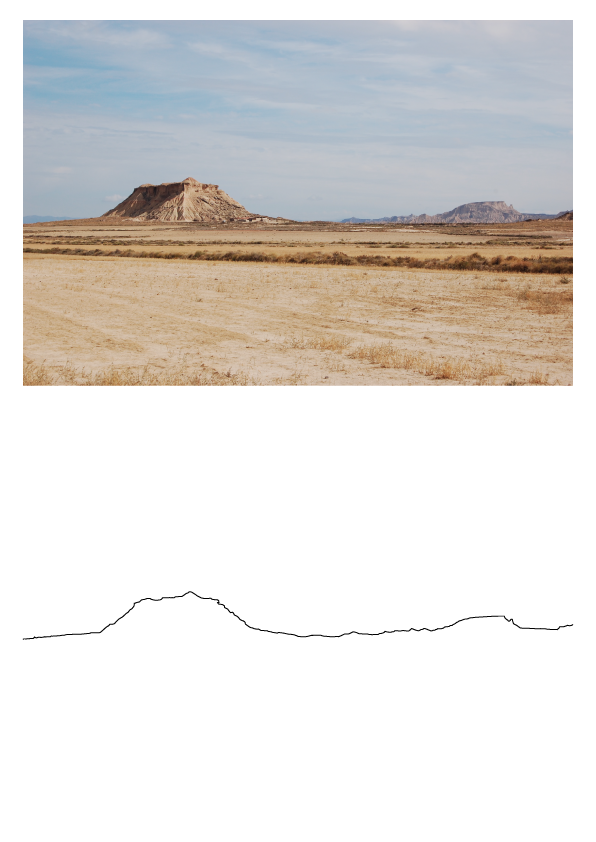 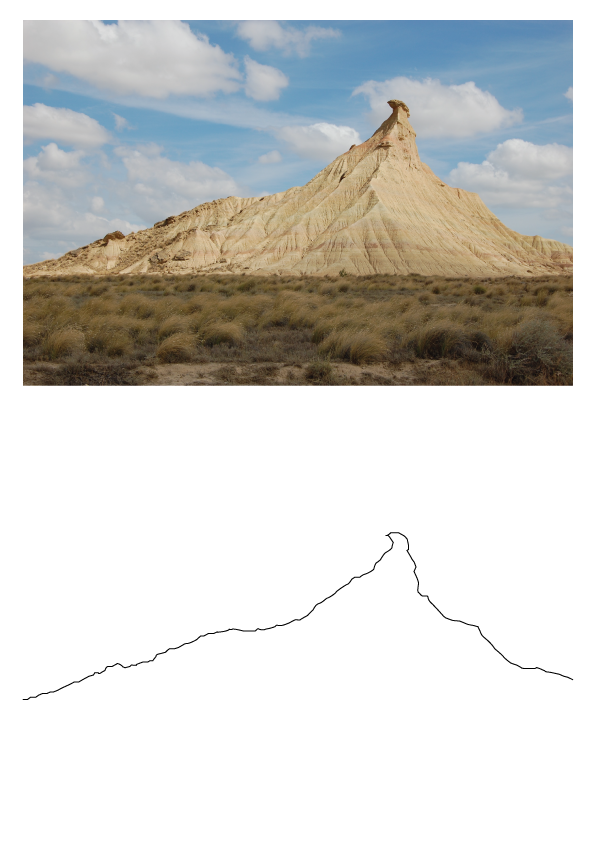 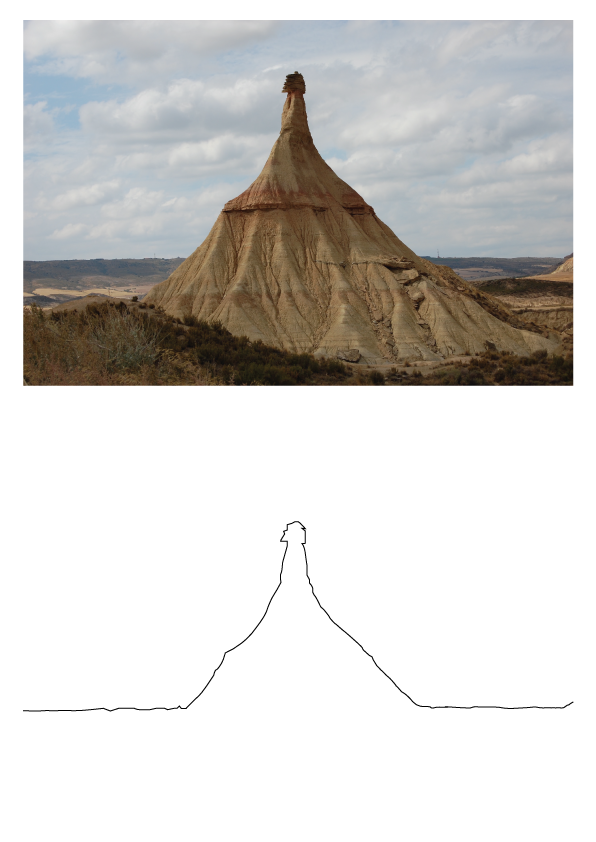 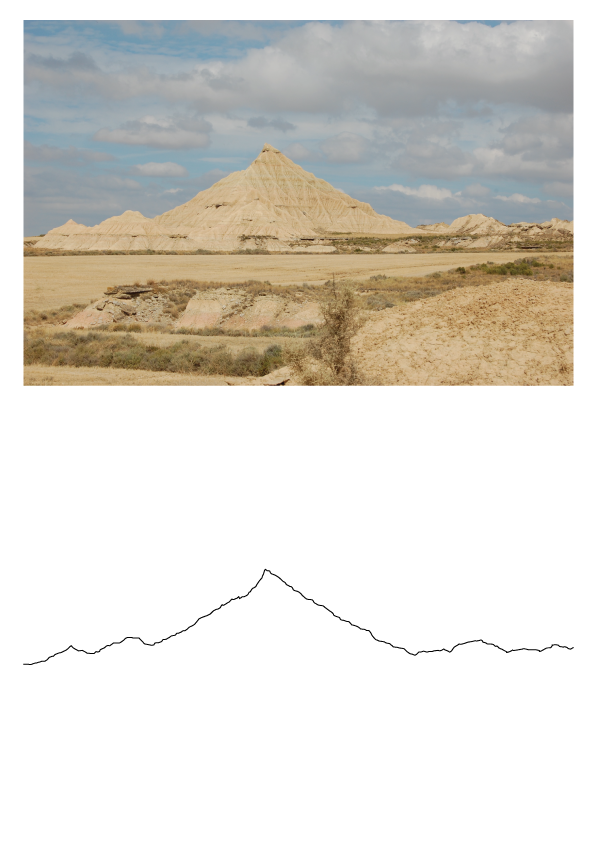 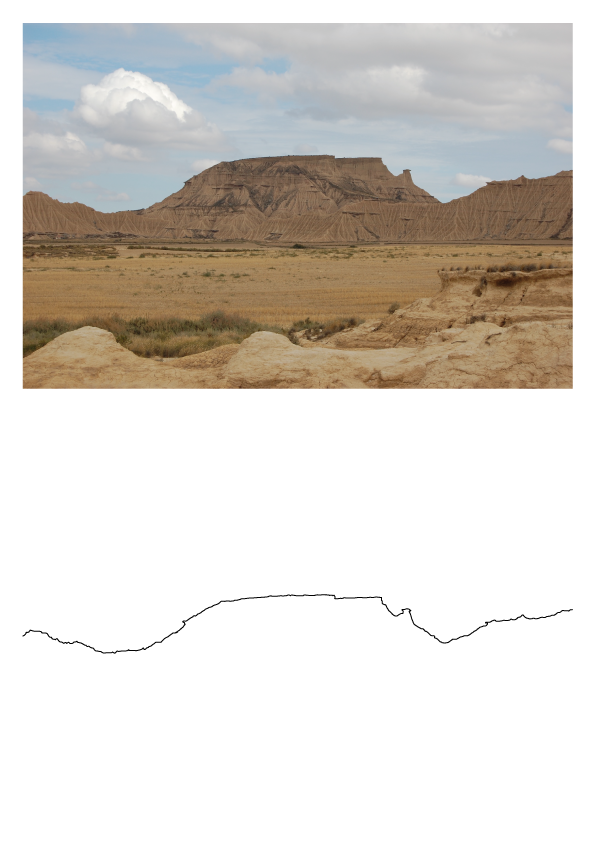 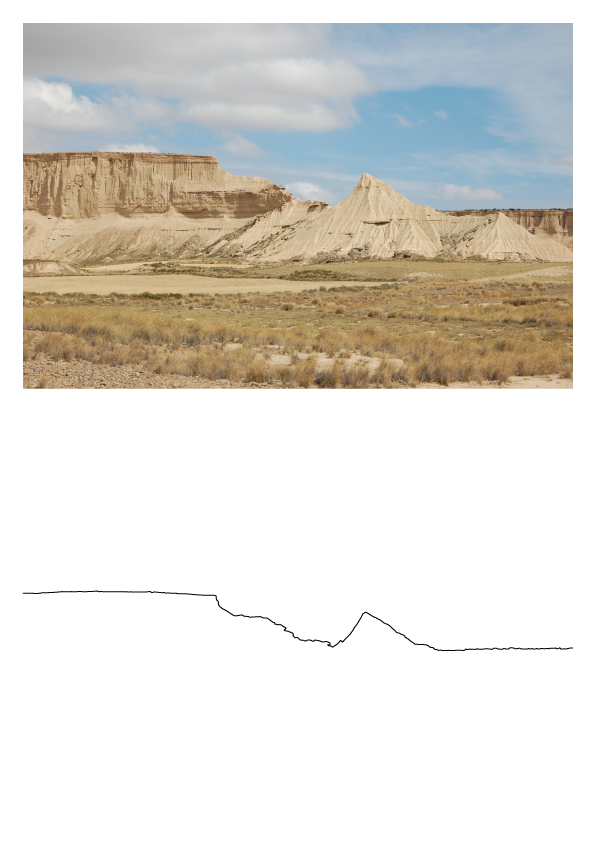 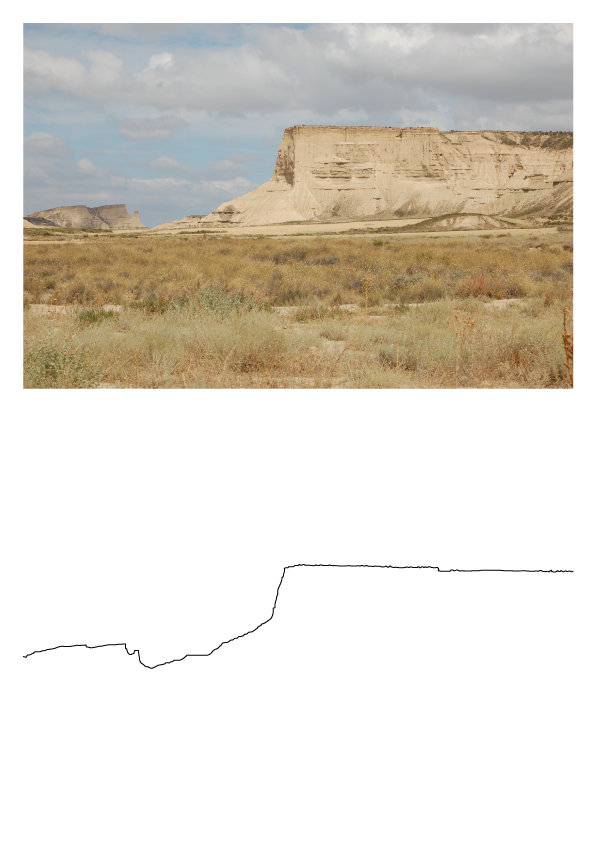 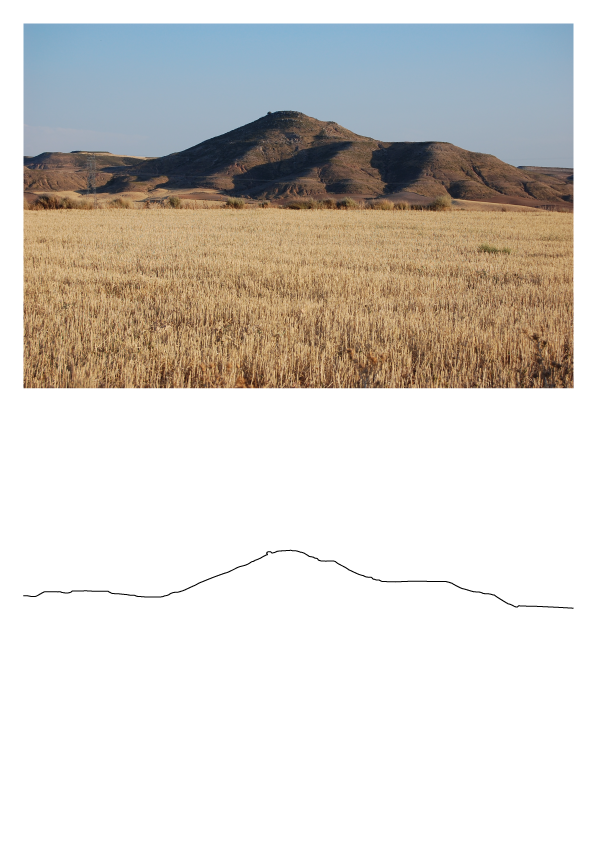 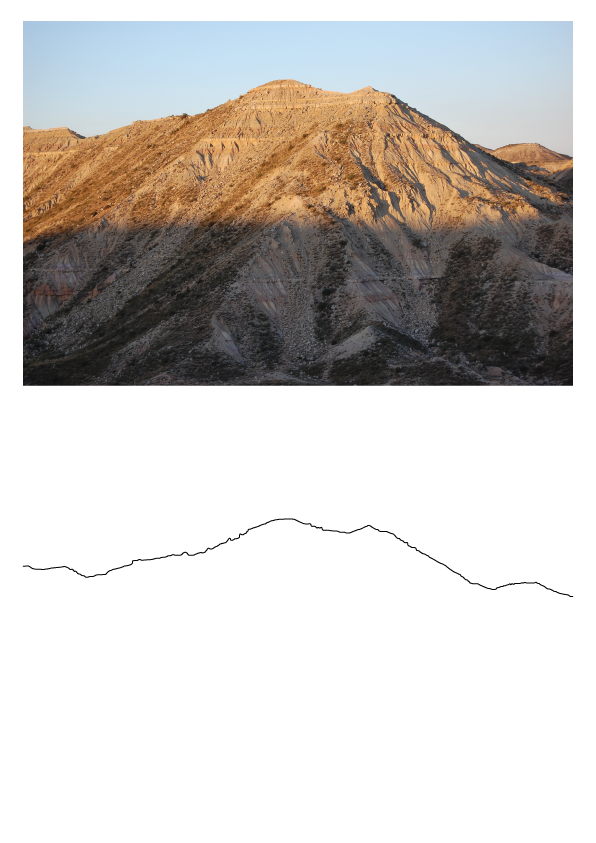 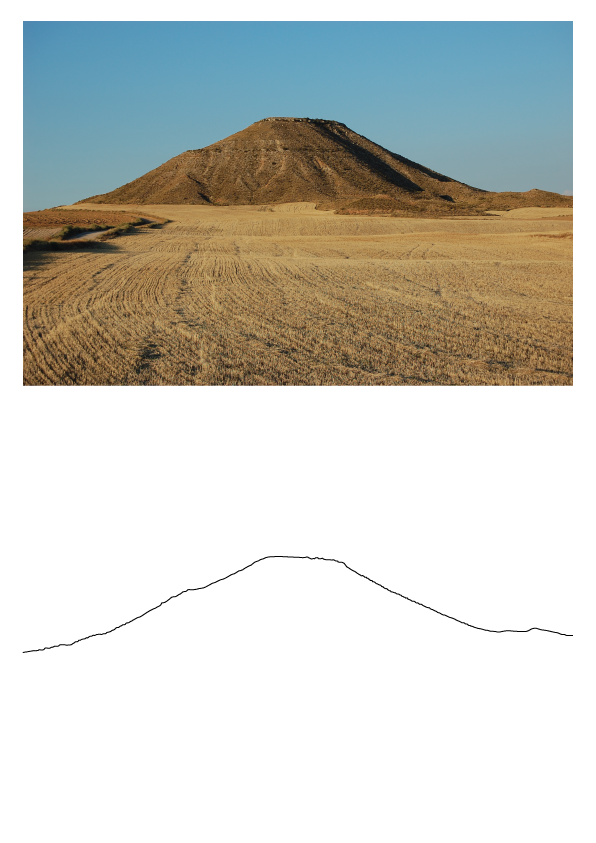 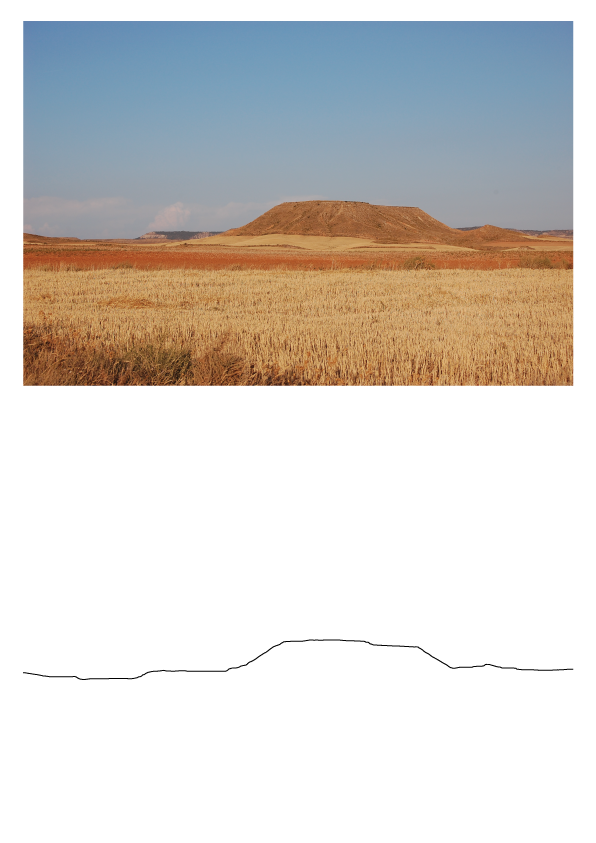 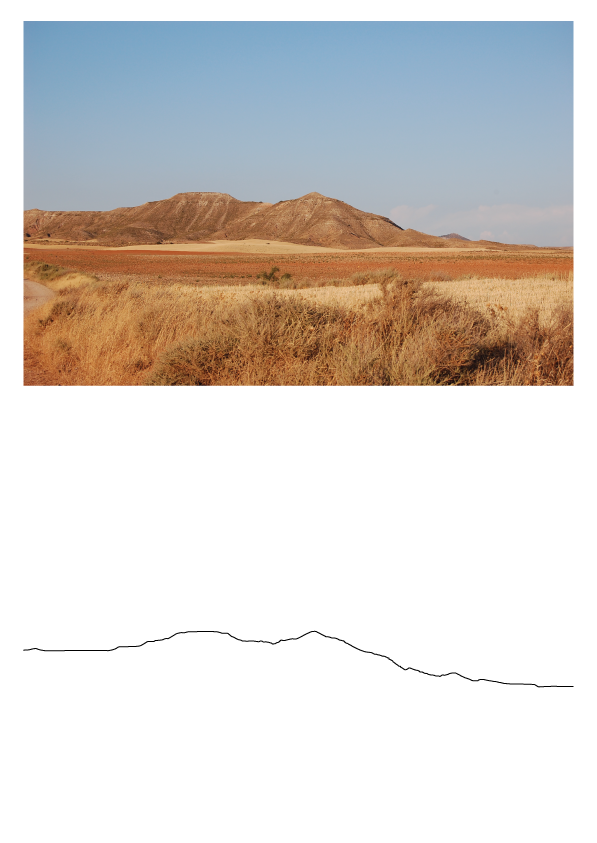 Before the performance starts, different scores will be shuffled and assigned randomly to each musician. Instrumentalists choose a single pitch prior to the performance, which they maintain to the best of their ability for the duration of the piece. All performers and field recordings begin in unison. The linear notation of the score represents time horizontally from left to right, while the vertical fluctuations cue changes in timbre-texture, dynamics, or rhythm, as determined by the musician. Performers are free to switch from one of these elements to another, but should continue with that element until the next significant fluctuation in the line, at which point they can change. In the ideal performance scenario, the audience is seated in the center of the room with musicians spaced evenly around them, facing in. Each performer is amplified through a single speaker of the surround system, while the field recordings are distributed and spatialized among all the speakers.